The Story of Semicolon by Eric Fischman 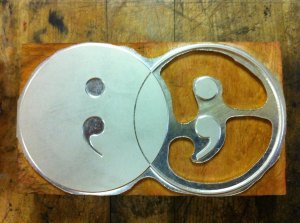 We sit in a jagged circle in a university basement and pass around the needle. Eleven poets dance on the head of this pin. Somewhere nearby clowns are clowning. A woman plays dangerously with power drills beside me. The pipes bang. One after another they hand it off, plunging into pulp like samurai performing seppuku. Sometimes they shiver. Sometimes they scream. The first dip is the best, they say.

When it’s my turn I hesitate. I can feel the friction of their eyes. Eleven heat-producing bodies are directed straight at me. Is that condensation or sweat on my brow? No matter now. I wipe my forehead with the back of my hand; grip the needle tightly. Come on, do it, they seem to say. Don’t you want to be cool? Don’t you want to be a poet? The truth is I don’t know what I want. I am a junkyard of nerves, but suddenly my hands are steady as if they’ve been here, as if they know the territory. Before I can think the order, my body executes, cutting a yard of waxed linen thread and passing it through the needle’s eye. How many of us would fit through there? Which among us is so righteous? My fingers dance along the cover, night-sky purple pilfered from a king’s cloak, inked in gold leaf, in oil filigree. I watch helpless as they part the book down the middle and from the center outward make the first loop.

No one can say whose idea Semicolon originally was. (Although it was June Lucarotti who gave it its name.) A bunch of us had taken Andrew Schelling’s weekend publishing practicum at Naropa in the Spring of 2012, and there was a lot of talk going around about not waiting for ethereal phantasms to materialize and publish our work. To be discovered by major corporate publishing houses with all the resources (see: money) to design, print, and distribute, Mr. Schelling taught us was a myth, something left over from a more primitive time. The tools of big publishing were becoming outmoded. We had the talent, the know-how, the access to new and old tech, and most importantly the motivation. The only thing we didn’t have were the “resources.”

Legend says that it was June who suggested we make it a student group in order to get funding from the university. On a rainy Thursday night at the Dark Horse the regular bimonthly writing workshop gave up its seat, and a herd of us wordsmiths sat around a wooden oasis in the upstairs taproom to pore over paperwork. All we needed were ten members, some official titles (Noah Christie was our first president), a constitution, and a budget proposal. We also needed a name. After June’s late suggestion, we narrowly voted against being forever known as, “Beef Poets.”

At the first Naropa budget meeting we presented our case – a student publication, open to all, thru which we would learn together by doing. It would not be in competition with Bombay Gin, as so many have erroneously argued, but in supplement. We wanted to fill in the gaps that Bombay Gin could never fit. Each semester we would come up with a different design for our book, a different shape or binding style, so that each time we made something we were learning something new. Whoever wanted to could learn typesetting and letterpress printing, how to hand-bind books with needle and thread, interior digital and exterior physical design, and all the things it takes to operate a small press. We needed money for cover stock, ink, linoleum tiles and carving tools, a copy of the latest in design software, printing costs for the interior of the book, bone folders and awls, 100-yard spools of colored thread, decorations and refreshments for events and group meetings, stipends for invited speakers, and postage to send copies to out-of-state contributors. Eventually we would want our own computer preloaded with the necessary programs, an office with a library of books on typography and book-making, an archive of all Semicolons past, and a door that locked. Maybe cedar. We asked for twenty-five hundred dollars but would have settled for fifteen. They gave us five. We got to it.

The first book was sixteen sheets of 8½ x 11 cream paper turned in landscape, folded to make sixty-four pages, and bound with waxed linen thread in a basic saddle-stitch. We ordered an engraving of a yin yang semicolon custom designed by Brad O’Sullivan, our letterpress teacher, to be printed in red with an old exquisite corpse sideways in black over it on oatmeal-colored 100-lb bond cover stock. We printed the list of contributors and our mission statement on the inside front and back jackets respectively, and in the lower right corner of the front cover printed in red the title, Bellow, named for April Jospeh’s dog, Bello, one of the two official mascots of the 2012 JKS program (the other was Yoda, son of Chewy, Chris Shugrue’s four-legged guardian and familiar). The cover required four separate runs, and we printed about a hundred-and-eighty copies in order to make room for plenty of mistakes over the one hundred-and-fifty books we’d intended to make. For the letterpress nerds we used a Vandercook SP-15 cylinder proofing press and did it all on campus at the Harry Smith Print Shop.

We decided to keep it an open anthology as, to our minds, anyone who submitted work was our collaborator in a communal act of self-publishing. We wanted to open a space in which all Naropa’s students could participate and interconnect. One night, over wine and incense on April and Bello’s floor, we read the submissions aloud, looking for the hidden threads, discussing the works and placing them in dialogue with each other. Once an order was settled, we set about designing the book’s interior on whatever clumsy default word processor was available and took it to print.

A few days later there were stacks of folded paper. After cutting the edges in the print shop, we held a binding party at the Pirate Ship, which we had heard was temporarily pulling into port. We busted out one hundred-and-fifty books in a few hours, as well as some prototypes, extras, and utter fuck-ups. Ultimately, from conception to completion, some thirty or more hands touched this book on its way to being printed, and it published nineteen different people.

Semicolon’s latest offering, The Riddles We Talked In, was printed on 6 ⅞ x 11 unfolded paper and bound in an ancient Japanese binding style. It’s 103 pages long and publishes a total of 48 people. Its theme, “Totems in Translation,” was in part a response to the recent passing of poet/trickster spirit animal Anselm Hollo. It was our way of honoring him by engaging with his work, his play with language, and his humor. The cover features artwork made by Robert Navarro and was carved into linoleum for letterpress by Janelle Fine. The book will be released for free (or donation) at the Semicolon Release Party on this Saturday, December 7th at 7pm at Innisfree Poetry Bookstore with live music, poetry and prose, magic and miracles, spontaneous transformation into bird spirits, flying dragons, fiery devils, and did I mention free books?!

It is our hope that Semicolon will persist at Naropa long after we are gone and will continue to thrive and evolve, exploring new options, techniques, and technologies along with the old and the arcane, and keeping self-publishing accessible and book-making vibrant for generations of students to come. And with Naropians like Steven Johnson, Sara Richards Graba, Ashley Margaret Waterman, Joseph Mark Navarro, and Jade Cruz Quinn at the helm, we know it has for this edition.

Back in the basement of the Lincoln building, my needle breaks. The thread frays as it meets the needle’s eye. I miss one spot and have to unravel an entire book. My hands are beginning to shake again. How I wish we were really shooting junk! Then at least I’d be steady, needle hovering like a Blackhawk helicopter, dancing in place to its dark sky music. Pricking my finger with the needle, I realize suddenly why this all feels so familiar and like I’ve been here before. It’s because I have! This is the third book Semicolon has made, and I have been privileged and blessed to work on all of them. I take a deep breath and thread the treacherous final loop, slipping the needle in at the spine between the cover and the first page and pulling it into a tight knot. Someone hands me a camouflage knife, the kind used for hunting bears by hand for skinning sharks. I lift up the book’s gold-printed, royal purple cover and cut the excess thread, leaving behind a little feather, a little tail.