Everybody’s Got a Song to Sing: Remembering Jim ‘The Man Of’ Steele

James H. Steele Jr, Boulder Poet, author of ‘Poetry and Verses: on the Nature of Things,’ (2017) and winner of 2016 Frozen Dead Poetry Slam as Paul Laurence Dunbar, died at the age of 82 after being hit by a car in Denver on Friday, April 5th.

I last saw him a couple nights earlier at VisionQuest Brewery for StarWater Wednesday, which I assume was his last reading.

He bought me a beer. He himself had given up alcohol years before, and when I tried to toast him he didn’t even have a water glass, so I just tapped my drink against The Binder, his large, cumbersome portfolio of poetry, his own and others, which he’d carry around and read from at just about every local open mic possible.

He told me about how he’d recently been recording his work with a blues band and they also might be performing in public soon.

We also talked poetry and teaching. He was curious how poetry could even be taught when it was so subjective and could be so many things. And I told him (loudly so he could hear) how he’s right but I try to objectively define it anyway for beginning students. He sympathized with the difficulty of the job and mentioned he’d taught an engineering class decades ago. It made me remember, oh yeah, this guy used to have a totally different life.

Jim Steele showed up on The Boulder Poetry Scene, I wanna say, 2011-ish. From my understanding, he’d been a linear-thinking normie scientist for most of his life up to that point. It was a successful life but also left him with a feeling of dissatisfaction. He was a drinker, which led to health issues, and after a seizure in his 70’s he was suddenly reborn sober powerhouse poet.

He could be a pretty startling sight for anyone who first witnessed him at the mic. An otherwise unassuming, bony-thin, gray-haired man, almost aways wearing thick glasses, flat cap and t-shirt, he just exploded when he spoke to the crowd, belting out his resonant high-pitched Virginia twang to all corners of the room whether microphone-amplified or not. He had as much energy as anyone there, despite generally being three or four times the age of the average open-miker.

An avid bridge player and long distance runner, he didn’t seem to slow down even as he entered his octaganerian years. It made you think Jim, early on dubbed ‘Man of Steele’ by So You’re a Poet host Tom Peters, might well be indestructible. It almost feels like it hadta be a truck to finally do him in, cuz natural causes never would’ve.

Steele was not without his flaws. He had a big ego which could be tiresome. He wouldn’t really attend events in which he himself couldn’t read, often showing up  late and missing all the other readers. He could be lax about crediting other poet’s work that he read. He was once kicked out of The Laughing Goat for causing a disturbance and was reluctant to apologize so he could come back. I remember him storming out one Monday night shouting “I AM Kerouac!”

But now that he’s gone it all seems pretty harmless, and I think about the good in him too. He had a generous side, once on his birthday opening a couple hundred dollar tab at VisionQuest available for anyone to use. Some of us in the know drank there for free for a couple weeks.

The message of the poetry he read was all positive, ironically often challenging our ego attachment. His most memorable poem/line was “everybody’s got a song to sing,” which a part of me always thought was a little silly and trite, but now thru the posthumous lens it actually seems kind of profound, especially considering that for almost 90 percent of this man’s life his song had probably been kept silent.

He did sometimes rub some people in the community the wrong way, and perhaps at times was a test of our commitment to the value of total inclusivity, but he was always undoubtedly part of the Tribe, and no one could say he didn’t add something truly unique to local poetry. 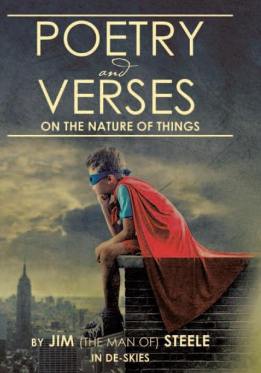 Hopefully he understood that I did have an appreciation for him, although in typical grief-regret I wish I would’ve said it more clearly out loud. I also regret not supporting him by buying his book when he was alive, which you can find here on Amazon.

If Jim Steele also meant something to you and you would like to honor his memory there will be a memorial reading 9-11pm Monday, April 15th at the Wesley Chapel (1290 Folsom St, Boulder). He will also be included in the Tribute to Poets Past at the annual Poetry Rodeo at the Mercury Cafe in Denver on April 20th.

Although I feel great sadness at Jim Steele’s passing, the mystical side of me believes his soul knew it was time for him to move on and will be able to look down upon us at these events and feel our appreciation and maybe even laugh at how much his ego would’ve wanted that kind of recognition when he was alive. His life is really just for us now tho, to remember fondly, learn from, and inspire in us that everyone’s got a song and it’s really never too late to sing it.

Jonathan Bluebird Montgomery is editor-in-chief of Boulder Poetry Tribe.  He’s a graduate of Sarah Lawrence College and the Jack Kerouac School of Disembodied Poetics at Naropa University.  The author of Pizzas and Mermaid, Taxis & Shit, and brand new novel The Reality Traveler, he lives in Boulder and teaches English at Front Range Community College.  You can read more of his creative work at jonathanbluebirdmontgomery.com